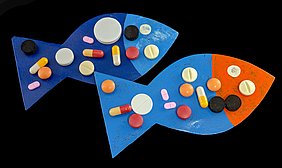 The project goal was to develop in vitro test systems based on the mode of action for the effect-oriented biomonitoring of pharmaceuticals using the drug classes of non-steroidal painkillers and beta blockers as examples.

Mechanism-based in vitro assays were developed as tools for pharmaceutical biomonitoring, and can be used to detect the effects of two groups of pharmaceuticals, anti-inflammatory painkillers such as diclofenac (NSAIDs) and beta blockers such as metoprolol. Stable cell lines were developed that express the mechanism-based sensory and signal-generating recombinant proteins. These make it possible to quickly visualise fluorescence signal changes in the living cells. The subsequent microplate assays were successfully used to quantitatively determine metroprolol and diclofenac activity in waste water treatment plant processes.

To show the relevance and suitability of this test to illustrate effects in field-relevant aquatic organisms, investigations were performed at the same time on fish, crustaceans, snails, and worms living in the sediment. The investigations took place under controlled laboratory conditions with single substances and binary mixtures, in aquatic mesocosms (guttering channels) and outdoor in a flow system fed from the discharge of a municipal waste water treatment plant. Population-relevant endpoints such as mortality, fertility or reproduction of the exposed organisms were investigated as well as biomarkers, which show the individual state of health. The project was coordinated by the University of Tübingen. About TZW: DVGW-Technologiezentrum Wasser (German Water Centre) in Karlsruhe supports the laboratory and field testing, and the validation of the developed in vitro test systems by means of chemical analyses.