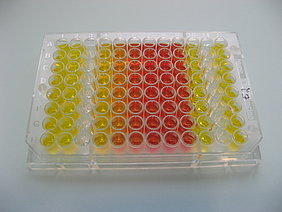 Evaluation of the YES assay

The occurrence of endocrine disruptors in water bodies is assessed in particular on the basis of chemical-analytical parameters. The chemical-analytical monitoring is carried out against the background of early detection of possible health hazards, whereby the significance depends on the selection of the target substances. An extended substance spectrum can be determined by biological effect tests.

Anthropogenic substances that enter surface waters with wastewater can lead to hormonal imbalances in numerous organisms. The hormonal effect can be attributed to a large number of different substances that are not fully recorded in chemical-analytical monitoring programs. This study evaluated a biological effect test for the detection of estrogenic substances and used it to examine water samples. The Yeast Estrogen Screen (YES) was selected for this purpose.

The YES showed no estrogenic effect in surface water samples. The analysis of samples from the wastewater treatment plant demonstrated inflow concentrations of up to 70.3 ng/L EEQ (estradiol equivalent concentration). No measured values above the limit of determination have been documented for drinking water in Germany so far. A health impairment by estrogenically active substances via the drinking water path is therefore low. Nevertheless, for precautionary reasons, it should be demanded that in particular the input of persistent anthroprogenic substances with endocrine potential into the aquatic environment is controlled and further reduced.

In principle, chemical-analytical methods are suitable for the detection of known estrogens in order to check the water quality. Additional monitoring by means of biological effect tests such as the L-YES test increases the reliability of the results, as the presence of previously unknown estrogenic substances as well as of estrogenic degradation products is also detected.

The volumes of the TZW publications can be ordered here.