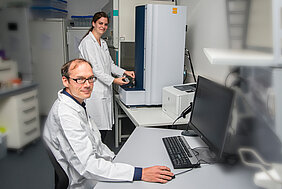 The MALDI-TOF method and its use in the drinking water sector were investigated in a DVGW research project.

MALDI-TOF is a method for the mass analysis of chemical compounds. This modern and highly innovative method is also used for bacterial identification and has already revolutionized this in the medical diagnostic field. It combines Matrix Assisted Laser Desorption Ionization (MALDI) with Time of Flight (TOF) analysis of released ions for mass spectrometry. Investigations within the framework of a DVGW research project have confirmed that this technique is also very promising for the drinking water sector. It works extremely fast and makes it possible to precisely identify bacteria in water.

The identification of bacteria is more and more important in the drinking water sector and can be an important tool for the analysis and evaluation of indicator bacteria such as coliform bacteria or enterococci. Furthermore, identification also enables the replacement of confirmatory reactions in the detection of pathogens, such as in the cultural detection of Pseudomonas aeruginosa, Legionella or Campylobacter species. However, this requires approval of the identification as an alternative confirmatory reaction within the framework of the respective standard.

The investigations of the TZW have shown that the MALDI-TOF technology is also very promising for drinking water laboratories or the water sector in general. The identification with MALDI-TOF-MS is very well suited for the bacterial groups relevant in the drinking water sector considered in the project (coliform bacteria, enterococci, Pseudomonas aeruginosa, Campylobacter). If bacterial isolates are available, they can be identified within less than one hour. This represents an enormous time saving, both in comparison to classical identification methods and in comparison to identification via DNA sequence. This speed is a major advantage of the method. In addition, up to 96 isolates can be examined on one sample plate (target) in one run.

The investigations revealed the great potential of the methodology, but also the limitations that currently still exist. As with any identification method, the identification result of MALDI-TOF-MS depends strongly on the underlying database. This database still shows a strong medical imprint. In the meantime, however, the manufacturer database is being successively expanded to include water-relevant bacteria. The investigations carried out as part of the DVGW research project have also shown in which areas there is still a need for database expansion.

MALDI-TOF-MS requires only a small amount of consumables and sample material. As a result, consumption costs are also low. Identification is also largely independent of the culture medium used. Isolates on general non-selective culture media could be identified well even after longer storage, only colonies on selective medium should be identified within 1 to 2 days.

A disadvantage is the comparatively high purchase and maintenance costs for the MALDI instrument. Highly specialized laboratories like the one at TZW offer MALDI-TOF-MS as a service for water utilities. These are in particular important when conspicuous microbiological findings need to be investigated as quickly, accurately and reliably as possible.

The main results of the research project were presented at the TZW Colloquium 2022 and can be read in the conference proceedings (in German). The detailed report on the project can be found in a separate TZW volume (in German).