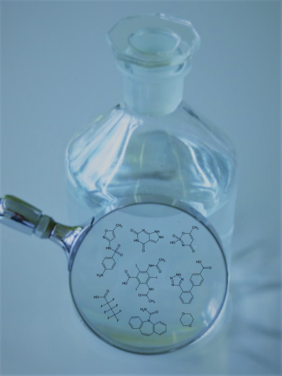 Organic micropollutants with very high polarity are not only an analytical challenge. If they are also persistent, they pose a challenge for water supply, as they are not efficiently removed by biological or chemical degradation, nor by sorption in natural systems and during water treatment. TZW is continuously expanding the analytical possibilities for such PM substances, many of which are obviously ubiquitous.

The presence of organic micropollutants in the aquatic environment depends to a significant extent on their persistence (P). Since the continuous release of such substances causes contamination, the question has been increasingly raised whether persistence alone is a major cause of concern. In recent years, the mobility (M) of micropollutants has also been considered critically, as such substances may enter drinking water due to their insufficient retention during river bank filtration and by activated carbon, thus posing a potential risk to human health.

In order to assess the occurrence of PM substances in water resources and to derive regulatory measures, the development of analytical detection methods is required. While the persistence of organic micropollutants hardly plays a role in their analysis, the pronounced polarity of a substance, which is often associated with high mobility, complicates its integration into classical target methods.

In the last decade, however, the polarity range of analysable organic trace substances has been enormously expanded. This has been made possible by the use of innovative materials in separation columns and the rethought use of established techniques such as the coupling of ion chromatography with mass spectrometric detection. However, gas chromatographic methods also continue to have their justification, as the current example of 1,4-dioxane shows. In the recent past, numerous highly polar compounds were detected for the first time, for which further data must now be collected quickly in order to better assess their relevance for drinking water supplies.

TZW is continuously expanding its analytical capabilities for such PM substances. Many of them have been proven to be ubiquitously present in the aquatic environment. For example, the UV blocker ensulizole and the industrial chemical diphenylguanidine were recently detected in a longitudinal sampling of the Rhine from Basel to the Dutch border.