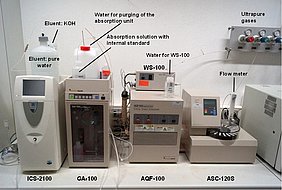 In the project, water chemical surrogate parameter of adsorbable organic fluorine (AOF) was developed. The unknown percentage of the organofluorine in a water sample can be determined by comparison with target compound analysis.

Raw and drinking water contamination with per- and polyfluoroalkyl substances (PFASs) has caused huge difficulties for water supply since the perfluorinated compounds (PFC) scandal was reported in North Rhine-Westphalia in 2006. The target compound analysis only assesses a few important PFASs that are identified as being key compounds. Based on the variety of fluorinated chemicals contained in technical products (e.g. fluorosurfactants in aqueous film forming foams for fire-fighting or fluorinated chemicals for grease proving of food contact paper and their transformation products), only a fraction of the organofluorochemicals present in water are assessed.

Sarah Willach (University of Duisburg-Essen) was awarded the DVGW Water Study Prize 2013 for her master's thesis on the development of AOF at TZW.