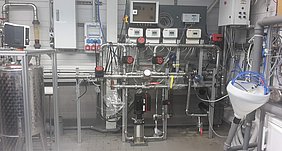 Following on from the basic research project GEntLED-UV, the focus here is on developing complete reactor systems, both for point-of-use (PoU) and large-scale applications.

The ELEDWa project, aimed at developing and producing complete disinfection units, directly follows on from the findings obtained in the basic project GEntLED-UV on LEDs as a radiation source.

To produce the UV device prototypes, country-specific regulations, CE conformities and even EMC standards that apply to electronic units are defined.

Technical regulations for a testing and monitoring concept only currently exist for conventional, mercury-based UVC systems (e.g. German testing standard DVGW worksheet W 294). The components and reactors developed in the project are first subjected to biodosimetric performance tests according to this existing norm.

In the course of the project, technical principles are developed for preparing a testing standard tailored to the characteristics of UV LEDs. Existing national and international testing requirements are used to achieve this, and a practical monitoring concept is developed to ensure safe use of the systems and components being developed.

The biodosimetric and technical validation of the developed PoU and industrial devices on the TZW test benches concludes the project.