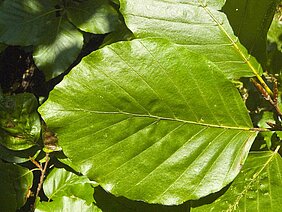 The comparison of current TFA concentrations in precipitation with the values from the mid-1990s indicates an increase in the atmospheric input of TFA within the last decades in Germany. Due to the physicochemical properties of TFA, it can be assumed that, analogous to the increase in TFA levels in precipitation, TFA levels in plants have also increased. However, systematic studies regarding temporal trends for TFA in plants were not available before the start of the project. This knowledge gap has now been filled using archived plant samples from the German Environmental Specimen bank.

statistical trend analysis was conducted for these matrices due to the small number of samples.

The results obtained in this study illustrate the ubiquitous occurrence of TFA in the environment and the positive trend of concentrations within the observation period represents a clear indication of an increasing atmospheric input of TFA into the (terrestrial) environment. This is particularly relevant in view of the projected increase in atmospheric input of TFA because of expected increasing emissions of gaseous precursors of the compound.

Website of the German Environmental Specimen Bank
TFA from the degradation of refrigerants
Final report (in German, English summary available)