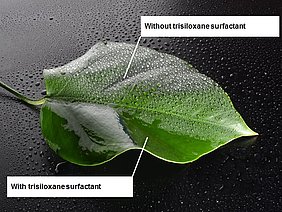 A novel method of analysis for silicone surfactants was used to investigate the environmental behaviour of a representative surfactant. Based on the ready hydrolysis of these substances these compounds are not expected to have a negative impact on the raw water quality of waterworks.

A study on the environmental significance of the rarely considered substance class of polyether trisiloxane surfactants was set up to assess the hazard potential of these non-natural substances (xenobiotics) from anthropogenic sources.

Organosilicone surfactants have been produced since around 1950. Since then, their applications have increased dramatically and include the manufacture of polyurethane foams and their use in products such as personal care products, paints and coatings, cosmetic products, and polishes. Trisiloxane surfactants in particular display exceptional wetting and dispersion behaviour. These properties take effect, for instance, when using these anthropogenic substances as agricultural adjuvants in pesticides (“superwetters” and “superspreaders”).

Pioneering analytical work was carried out in this project to analyse trace amounts of selected, important trisiloxane surfactants from water. Using an innovative analytical method, characteristics such as stability and the mobility in groundwater have been tested in lab experiments with a representative surfactant, and surface water has also been investigated. Adsorption and hydrolysis were derived as important elimination mechanisms in the environment. It is therefore unlikely that trisiloxane surfactants pollute groundwater. Isolated cases of trace amounts in the ng/l range have been found and only in surface water. Hydrolysis produces transformation products, some of which have been identified. The further retention of these products and their effects on the environment cannot be evaluated at present as they are even more difficult than the surfactants to record analytically and no toxicological or ecotoxicological data is available.

A. Michel, H.-J. Brauch, E. Worch, F.T. Lange (2012). Development of a liquid chromatography tandem mass spectrometry method for trace analysis of trisiloxane surfactants in the aquatic environment: An alternative strategy for quantification of ethoxylated surfactants. Journal of Chromatography A 1245, 46-54.