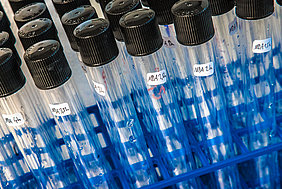 Due to a lack of data, it has not yet been possible to assess whether the introduction of parameter values for BPA and NP will pose a challenge to the drinking water supply in Germany. The goal of this DVGW-funded research project (W 201833) was to get a sufficiently informative number of drinking water samples made available by supply companies in order to analyze BPA and NP. Under this condition an overview about a potential contamination of drinking water in Germany.

The European Commission's revised Drinking Water Directive provides parametric values to be met for the oestrogenic endocrine disrupting compound (EDC)bisphenol A (BPA) of 0.1 µg/L and iso-nonylphenol (NP) of 0.3 µg/L in drinking water. Neither substance is currently a required parameter of the German Drinking Water Ordinance. This leads to the above mentioned lack of data for a realistic assessment  whether a challenge to the drinking water supply in Germany arise if these parameter values will be established.

However, it is a fact that relevant concentrations of BPA and NP can be determined in water bodies. For example, the maximum BPA concentration in the Ruhr at the scale Wetter showed an annual average value of 0.028 µg/L with a maximum individual value of 0.12 µg/L in 2015 (Ruhrgütebericht  - Ruhr Quality Report - 2015). Responsible for the input of BPA into surface waters are mainly discharges from municipal sewage treatment plants and the input from the BPA-processing industry.

An additional source of the release of BPA into the drinking water are materials containing BPA, such as polycarbonates or epoxy resin coatings in products for use in drinking water. Although the BPA release is limited in the context of hygiene tests according to the guidelines of the Federal Environment Agency, the current test value of 2.5 µg/L is significantly higher than the parametric value of 0.1 µg/L as planned in the Drinking Water Directive.

The research project therefore should provide reliable database by means of a relevant number of drinking water analyses in order to estimate the extent to which a possible entry of BPA and NP into drinking water is to be expected, especially in concentrations above the parameter value of 0.1 µg/L and 0.3 µg/L respectively.

In the course of the invetigations, a total of 63 drinking water samples from the routine monitoring of 32 water suppliers could be analysed. The majority of these samples were received from suppliers of groundwater, followed by suppliers with bank filtrate as raw water source. In addition, the water flow path: raw water - waterworks (incl. intermediate steps of water treatment) - storage - distribution - drinking water installation was systematicly studied out at 7 water suppliers by taking a total of 42 samples. None of the analysed samples showed BPA or NP in concentrations above the analytical determination limit of 0.005 µg/L for BPA and 0.025 µg/L for NP. This result applies regardless of whether the samples were taken at the waterworks outlet, after containers, in the network or in drinking water installations.

Based on the current state of knowledge, it can be assumed that the drinking water distributed by German water suppliers is free of bisphenol A and iso-nonylphenol. Nevertheless, it is advised that drinking water supply companies should include the monitoring of the parameters BPA and NP in their periodic programme.  At least a random sampling for a limited period of time is recommended. With such evidence the situation in the concerned supply areas can be assessed as not critical.