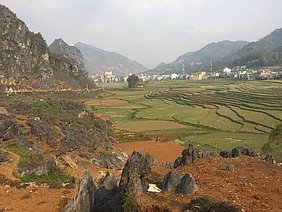 Ceramic membranes for particle removal were applied in parallel operation with conventional sand filtration for drinking water production in pilot scale for application under rural conditions in Vietnam.

Results from pilot-scale trials are incorporated in the process concept. A pilot plant was installed within a container. The pilot plant consisted of various treatment lines including conventional rapid sand filters with flocculation and two lines with ceramic micro- and ultrafiltration membranes. The remote controlled test container was initially operated in Germany and may be shipped to the project region in Vietnam. At the end of the project the pilot plant could remain in Vietnam and produce drinking water as a point-of-use system for a public building.

This research was conducted in co-operation with the company Hydro-Elektrik GmbH within the joint research project KaWaTechSolutions under coordination by Karlsruhe Institute of Technology (KIT) and subsidies of the German Ministry of Research and Education (BMBF).