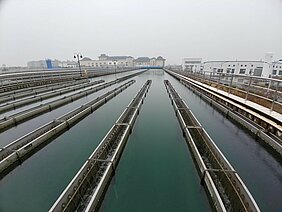 The Sino-German Water Supply Network (SIGN) is a joint project that has been running since 2015 with BMBF (Federal Ministry of Education and Research) funding and is already in its second phase. A recently published special issue of the journal "Science of the total Environment" entitled "Taihu (China): Water Quality and Processes - From the Source to the Tap" offers now a comprehensive overview of the research work on Lake Tai in China. Prof. Dr. Andreas Tiehm, head of the department of Micro- and Molecular Biology at TZW, is the project coordinator of this joint project. He has answered some questions about SIGN for the TZW NEWS.

Question: Could you start by briefly explaining what the current special issue contains?

The special issue summarizes 26 publications with investigations on pollutant distribution in Lake Tai up to innovative approaches in the fields of monitoring, modelling, drinking water treatment and distribution. The SIGN/SIGN2 consortium has initiated the publication of current results of the BMBF-funded projects as well as of the Chinese projects as a thematically focused special issue with the title "Taihu (China): Water Quality and Processes - From the Source to the Tap" of the journal "Science of the total Environment" (STOTEN). After completion of the external peer reviews, the special issue is now available online.

Question: The Sino-German cooperation began in 2015. Was there a reason to start this project? Why was Lake Tai chosen as the object of research? What is the special significance of Lake Tai for the water supply in China?

At Lake Tai, China's third largest freshwater lake, increasing water pollution has been observed for years. Eutrophication and algae blooms have characterised the lake since the late 1980s. Accordingly, Lake Tai is a drastic example of water pollution with organic pollutants, nutrients and heavy metals, which are found in many shallow freshwater lakes in China. Nevertheless, Lake Tai is used as a drinking water source for more than 10 million people. The low and fluctuating raw water quality requires challenges for the drinking water supply. Due to the rapid industrial and economic development and thus the continuously increasing demand for process and drinking water, the Lake Tai region became one of the focus regions of the current Chinese funding program for the control and treatment of contaminated water. The described problem is typical for many shallow lakes in China. In the framework of the Sino-German cooperation research activities at Lake Tai have been carried out since 2015. The TZW coordinates the joint project from the German side, which is now in its second phase (SIGN2).

Question: Could you explain in more detail what kind of research will be considered within the project?

The aim of SIGN/SIGN2 is an important contribution to improving the water quality at Lake Tai by taking an integrated overview of the different processes - water quality, raw water quality, drinking water treatment to drinking water distribution. Mixing processes between water and sediment have a great influence on the distribution of pollutants in the lake and thus also on the raw water quality for drinking water production due to the very shallow water depth of Lake Tai. In order to gain a deeper process understanding of the pollutant dynamics in Lake Tai, innovative monitoring methods and sensor technologies are tested in the joint project. Inorganic and organic pollutants, biomass and toxicity will be considered to elucidate these exchange dynamics. Innovative techniques such as field flow fractionation will be applied to determine the influence of particle size and density on the dynamics of suspended particles in the water phase.

Question: If the raw water quality of the lake is so low, how can we manage to produce drinking water from it? In which direction are these considerations going? Which treatment steps are considered?

Question: What are the next steps for the research work?

In the SIGN2 joint project, technologies and concepts proven in Germany will be adapted to the boundary conditions in China. Currently, the methods are further developed and the samples already taken from several sampling campaigns in China are evaluated. Due to the Corona pandemic, the planned field trips and conferences in China this year unfortunately had to be postponed to next year. Next year, demonstrations, trainings, workshops and conferences should take place again in China. The overarching goal of the research activities is the adaptation of the German products for the Chinese market and recommendations for management concepts for sustainable water management.

Question: Who are the project partners on the German and Chinese side and how is the funding provided?

On the German side, the consortium consists of 13 project partners with 8 partners from industry as well as 2 universities and 3 research institutes. The German partners are funded by the BMBF within the framework of the funding program CLIENT II. On the Chinese side, the consortium works mainly with Tongji University (Shanghai), the Chinese Research Academy of Environmental Sciences (Beijing) and Jiangnan University (Wuxi) as well as several water suppliers and technical authorities at Lake Tai. The Chinese partners have their own funding programs. The successful implementation in China is ensured by the participation of excellent research institutes as well as the relevant authorities and waterworks on the Chinese side. Demonstrations, trainings as well as workshops at research institutes will increase local acceptance.

Further information about the SIGN consortium and the Special Issue

If you are interested, the SIGN2 coordination team can provide further information or hardcover copies of the Special Issue. You can find the editorial of the special issue online under this link.

Sino-German Water Network  (SIGN): Clean Water from the source to the tap

Sino-German Water Supply Network (SIGN2): Clean Water from the source to the tap