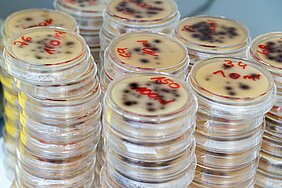 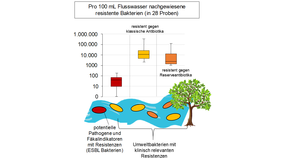 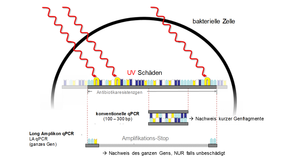 Within the framework of a project funded by DVGW over a period of three and a half years, adapted methods for the detection of antibiotic-resistant bacteria in the aquatic environment and of resistance genes after drinking water treatment and disinfection were developed and applied.

Detection of resistance genes after treatment and disinfection

Reactive processes such as UV irradiation, chlorination and ozonation are common techniques in drinking water treatment. They lead to DNA damage and can therefore inactivate resistant bacteria and resistance genes. Antibiotic resistance genes have a size of up to 2000 base pairs and must be present as an intact gene to confer resistance. For the detection of resistance genes in standard molecular biology methods (qPCR), only small sections of these genes (100 to 300 base pairs) are examined. If exactly these subsections are not damaged after reactive treatments, false-positive results may occur. In order to realistically detect elimination efficiencies, so-called long amplicon methods have been successfully developed to detect the complete resistance genes. It could be shown in lab experiments and samples from drinking water treatment that the elimination performance of the three reactive methods is underestimated by up to a factor of 90 with the standard method compared to the long amplicon method.

The results of the project confirm the relevance of environmental bacteria as a reservoir for antibiotic resistance and offer the possibility of optimized detection after reactive water treatment. The detection and elimination of antibiotic resistances are currently being further developed and comparatively investigated in projects for the advanced treatment and reuse of wastewater ("reclaimed water", German title “Nutzwasser”) and in an international cooperation with eight partners in Europe and Africa ("SARA - Surveillance of Emerging Pathogens and Antibiotic Resistances in Aquatic Ecosystems").