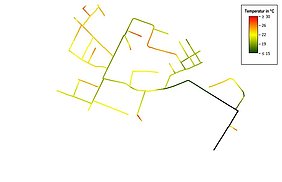 Visualisation of water temperatures in a network area

The implementation is carried out with a survey in which various water suppliers are asked about their situation regarding drinking water temperatures. From this survey, among other things, information will be obtained on how the problem is assessed and how it affects them.

In addition, research is being conducted into the causes of elevated temperatures in drinking water supply networks. Among other things, natural and anthropogenic input sources as well as contributing heat transport processes are taken into account in greater detail. The results will then be incorporated into an adapted measurement program at various water suppliers and form the basis for the development of a heat transport model.

The results of the investigations should provide information about which heat inputs are primarily responsible for high drinking water temperatures and which process variables have the greatest influence on heat transport. Furthermore, the system understanding gained in this way should make it possible to deduce, on the basis of simple criteria, in which areas of a pipe network "hotspots", i.e. areas with increased water temperatures, occur and which measures are appropriate.