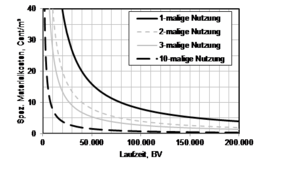 The possibilities of treatment technologies to remove vanadium from drinking water were derived as part of a literature survey.

In some German drinking waters, concentrations of the heavy metal vanadium were found to be above the 4 µg/l guide value for drinking water, derived based on human toxicology. There is currently no field-tested method to remove vanadium during drinking water treatment.

The removal of vanadium was experimentally proven for flocculation with iron salts. Significant removal rates were determined in semi-technical trials on flocculation and sedimentation.

According to the literature, by using granular ferric hydroxide material, vanadium can be removed during drinking water treatment. The operation time of the adsorber material until replacement depends on the quality of the raw water. Low concentrations of phosphate and arsenic and a sufficiently low pH value favourably impact vanadium removal.

From experimental investigations into chromate removal as part of drinking water treatment, references to the suitability of anionic exchangers for vanadium removal can be derived. These first results indicate a high sorption capacity for vanadium and a possibility for regeneration, which allows the exchanger to be used multiple times.