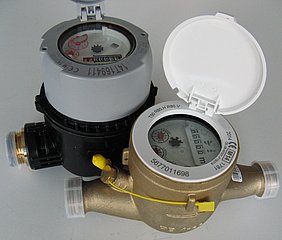 Since 2010, isolated cases of microbial contamination, for example by Pseudomonas aeruginosa have been established in compound water meters. However, it was unclear whether this contamination was already present in the new meters or caused by inappropriate conditions during installation. As a result, TZW and the meter test centre of Stadtwerke Karlsruhe started a DVGW project in the summer of 2014 to survey the microbial load of new water meters. The aim was to clarify whether the water meters with microbial contamination were isolated cases or if this was a systematic problem.

In addition to data from TZW studies, the project also used data from water meter investigations from other laboratories of water supply companies for the survey.

It was assumed that contamination occurred during testing/calibration on the test benches. The manufacturers or testing institutes subsequently adopted relevant measures and since the start of 2015, the findings have dropped significantly. In the data up until the end of 2014, there was a clear difference between the findings in meters with metal housing and those with plastic housing. Only 14 % of the former were contaminated with Pseudomonas aeruginosa whereas the rate of positive findings for the plastic meters was 50 % on average. The level of contamination was also considerably higher for the water meters with plastic housing.

The findings clearly showed a systematic problem for water meter contamination with Pseudomonas aeruginosa, which needs to be rectified by taking appropriate measures on the test benches.

A comparable microbial load may also be relevant for other brand-new products if these are tested or calibrated when wet. Before installing new water meters or other products in vulnerable facilities such as hospitals, retirement homes or nurseries, in particular, it should be ensured that these are not contaminated by Pseudomonas aeruginosa.