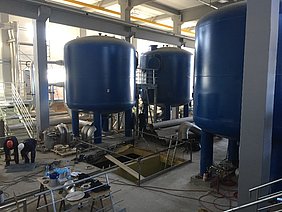 The administrative district Vršac has approx. 52,000 inhabitants and is about 90 km north east of Belgrade in the autonomous province of Vojvodina. As part of the project “Water and Sewerage Programme in Medium-Sized Municipalities in Serbia – Open Programme” funded by the German development bank KfW in Serbia, an international engineering office created a feasibility study on how to upgrade the drinking water supply in Vršac. So far, anoxic groundwater was distributed without treatment (nominal flow 1100 m³/h).

On behalf of KfW TZW evaluated the two process concepts, which were foreseen in the feasibility study. It was found that these concepts (including ozonation, ion exchange and adding various chemicals) did not fit for the chemistry of the local ground water. In particular, rather high quantities of ammonium and methane have not be considered.

An alternative concept using the treatment technology of aeration and biological-catalytic filtration. At the request of the water supply company “JKP Drugi oktobar Vršac”, TZW carried out pilot testing with this process for four months. This was successful and provided key figures for outlining the design of the large-scale plant, which started operation at the start of 2018 after about three years of planning and construction.

The total costs of approx. € 6 million were funded by the KfW. The entire project was scientifically and technically supported by TZW.