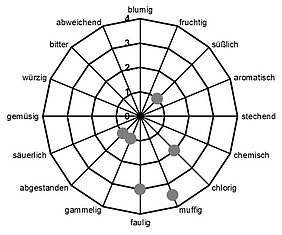 In the joint R&D project of the DVGW and the ATT along with five other water suppliers, researchers aim to identify the causes of a “musty” odour problem in drinking water after distribution in the network. Based on this, the most effective methods to identify and prevent these odour incidents should be found and early warning indicators developed if possible.

Due to the high concentration variability, long-term measurement series and robust analytics were needed for evaluation. In regular testing of three waterworks over a period of six months, the first comprehensive study was performed. Based on lab experiments, the capacity of free amino acids to produce odours is established, as well as that of peptides and proteins. Different chlorine and nitrogen concentrations were used and the reaction times were varied. Using mass spectrometry (HPLC-MS) analyses in model solutions it was possible to then determine individual chlorination products.